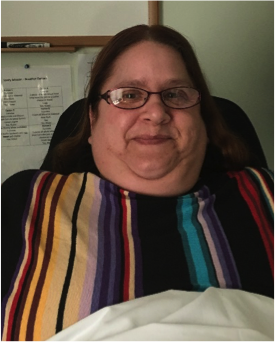 She was told that she would   never live to see the age of one. She was told that she would never bear children. The story of Sandy Johnson is one of bravery, strength and defiance in only the best way. This remarkable woman is a resident of the Loch Lomond Villa and her infectious laughter has travelled through the entirety of Dogwood House, which she has called home since February of last year. Sandy turned 52 this year, defying all odds against her for half a century and counting. She had a daughter at 37 – Cassie, her “miracle angel.”

Sandy Johnson was born with hydrocephalus – colloquially known as “water on the brain” – in addition to being paralyzed from the waist down. As her life went on, she faced a number of obstacles: spina bifida, scoliosis, diabetes and multiple back surgeries, one which fostered gangrene and lead to the amputation of both legs, at the tender age of 12.

Sandy is one of Dogwood House’s social butterflies, truly encompassing the “young at heart” motto. She enjoys playing card games with other residents, she took up crochet with a summer student and she is most in her element when she turns the Village into a concert during karaoke. Music is one of Sandy’s great loves and she is always ecstatic to hear that a special guest is scheduled to visit and perform. She appreciates the outdoors and participates in every outing that she can, always looking forward to a chance to explore. Her favourite destinations are Mispec Beach and St. Martins, and she enjoys venturing out to East Coast Pub for a bite to eat.

Most of the activities that bring joy to Sandy and her fellow residents are made possible through the generosity of your donations to Loch Lomond Villa Foundation; from the van that takes them on day trips to the ability to bring in musical performers to the beautiful landscaping that our windows look out upon. And so much more!

The positive atmosphere of the Villa has facilitated Sandy’s growth as a person. She has revealed that she sees herself as a new woman here and her positive outlook on life has never gone unnoticed. She is outgoing and upbeat, traits that have proven beneficial as she meets new people and makes numerous new friends. Sandy values education, which rings true as she strives to learn more about herself and others every day at the Loch Lomond Villa.

Sandy hit the nail on the head when she expressed, “no one thinks they’re better than anyone else; everyone is equal,” speaking on life at the Villa. She is appreciative of her living environment, the friendly staff and her fellow residents, with whom she has developed a special connection. Sandy smiles as she recalls her time at the Villa and shares, “I wouldn’t leave. Even if I had to.”